When we think of penguins, we often think of their clumsy steps and cute looks. But you know what? The fossil records show that the evolution of the emperor penguin, the giant of the penguin world, probably began at the age of the dinosaurs. It's hard to imagine such a lovely species can survive from millions of years of extreme cold and dark winters.
Here are some interesting facts about emperor penguins. Let’s learn more about the cute and tough icons of Antarctic.

1. Giants of the Penguin World

Emperors are the biggest of the 18 species of penguin ever discovered. They are around 120cm (4ft) tall, the height of a six-year-old child. They weigh about 38 kilograms (84 pounds). The emperor penguin is more than twice the size of the next largest penguin.

Temperatures in Antarctica can drop to minus 50 degrees Celsius while wind speed reaches up to 200km/hr. However, Emperor penguins have evolved over time to survive in this harsh environment. They have two layers of feathers and plenty of fat reserves. Compared to other penguins, their beaks and flippers are smaller to prevent heat loss. Also, they have feathers on their legs, just like warm pants, so their ankles don't get cold.

Emperor penguins have developed a unique social behavior that 5,000 or more adults and chicks huddle together for warmth when the weather gets cold. Of course, penguins on the fringes of the colony do not feel so well, as they only have parts of their bodies protected and warmed by other penguins. So the penguins constantly move from the outside to the center, taking turns to the coldest places to withstand the wind and the biting cold. 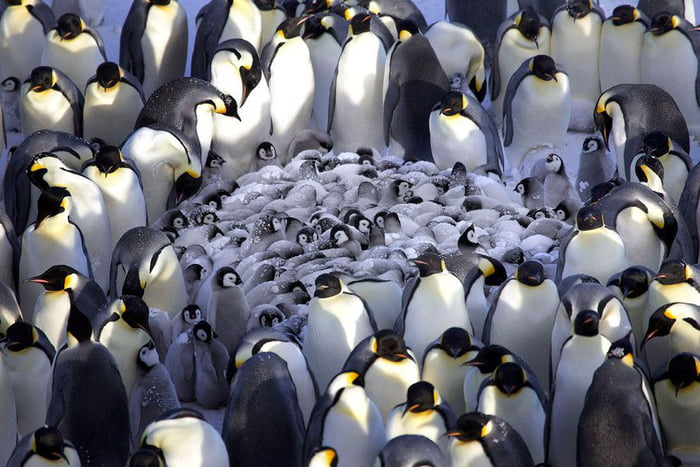 Emperor penguins dive deeper than any other birds. Most of them can dive between 100 and 200 meters, and occasionally they go deeper. The deepest diving record of human is 564 meters! That's almost twice the height of the UK's tallest building, The Shard. In addition, the longest diving record for an emperor penguin is nearly 28 minutes. That's incredible! 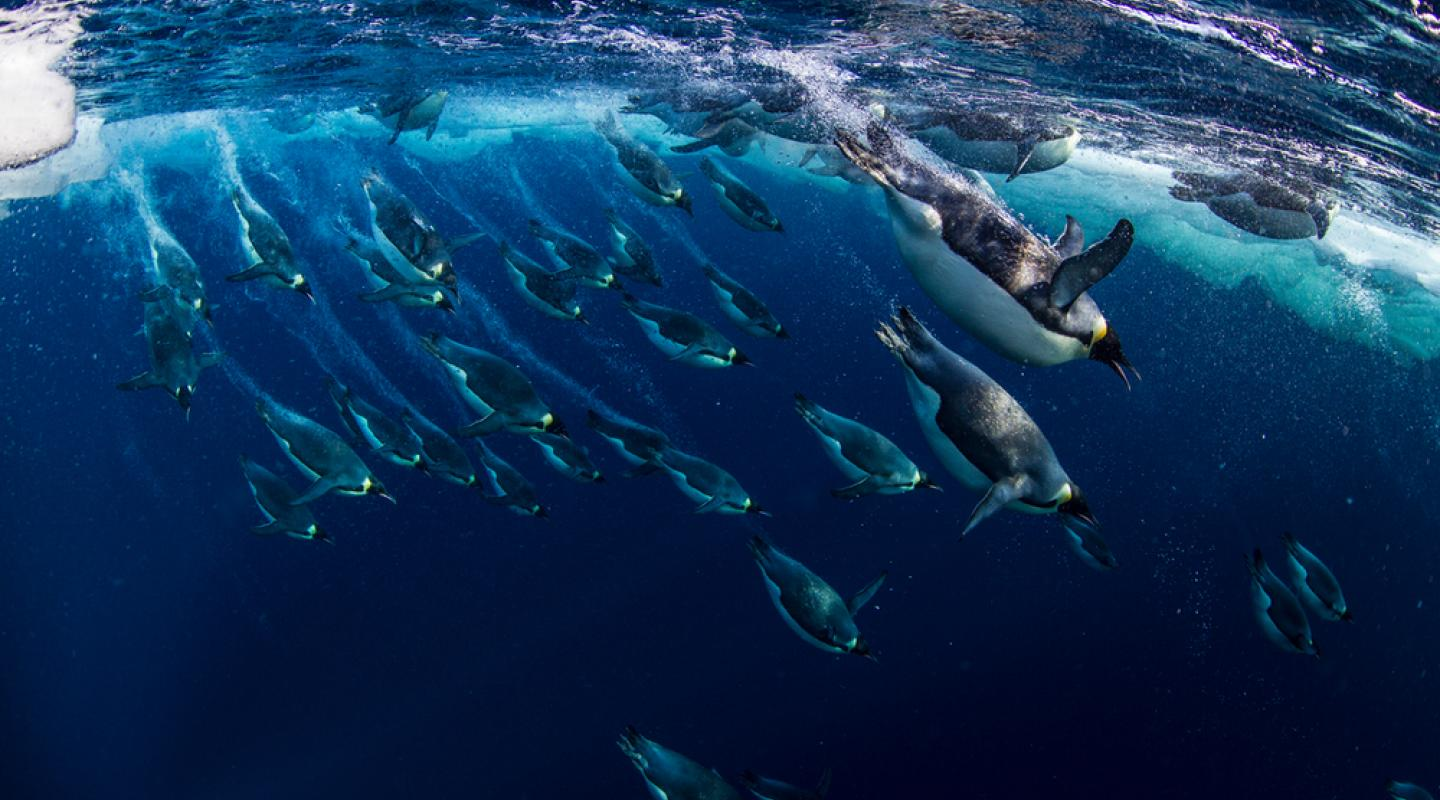 Emperor penguins hatch during the long, dark Antarctic winter. The female lays an egg in May or June and gives it to her mate to hatch. She will spend the next nine weeks at sea foraging for her family. The male carefully makes the egg balanced on his feet for 65 to 75 days and covers it with a warm layer of feathered skin called brood pouch. Male emperor penguins do not eat until the mothers bring back food. During this time, they spend the long winter only by the fat they accumulated in the summer, losing nearly of their body weight! 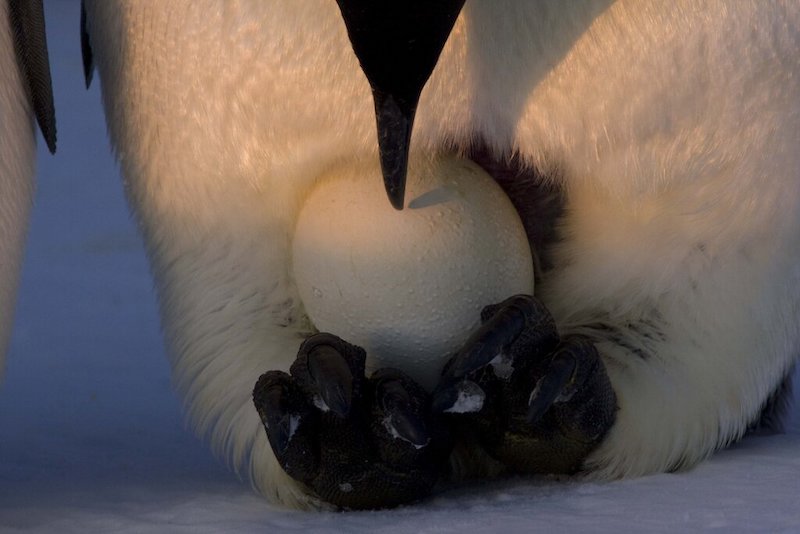 In all penguins, the emperor penguin is the most ice-dependent one. Emperor penguins are also the only penguins to breed on sea ice and spend the winter in Antarctica they need ice to forage, breed, and raise their young.

However, in parts of the Antarctic Peninsula, sea ice cover has decreased by more than 60 percent in 30 years due to global warming caused by greenhouse gas emissions. In addition, some waste plastics also cause pollution to the ocean. This is a great threat to the survival of the emperor penguins. The International Union for Conservation of Nature (IUCN) has listed the emperor penguin as a threatened species. Scientists predict that emperor penguin populations could decline by as much as 33% by the end of the 21st century. 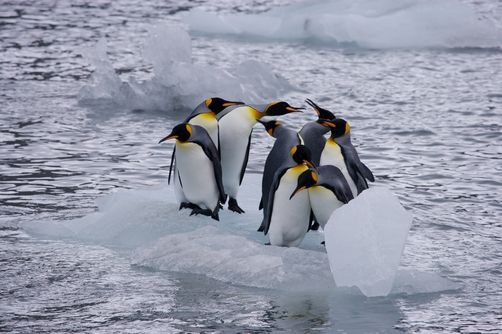 So we have to do something for them right now! Reducing your carbon footprint is the first step you can take to reduce the greenhouse effect, for example, driving and flying as little as possible. Then, get involved in plastic recycling programs, such as G&G's recycling cartridges program to support reducing plastic waste in the ocean. Of course, you can also support penguin conservation efforts with a donation, such as the symbolic adoption of a penguin through WWB.

In the run-up to World Penguin Day, G&G will be making a donation in a fun way. Stay tuned and join us in our efforts to protect the emperor penguins!

Share article
Good Product & Good Service
Contact Us
Support
Stay Connected with G&G
You are providing your consent to Ninestar Image Tech Limited doing business as G&G, so that we may send you promotional emails. You may contact us to withdraw your consent or view our Privacy Policy at any time.
Follow us

Copyright © 2022 Ninestar Image Tech Limited All rights reserved. Plagiarism Prohibited. Technical Support ：e-net
You are providing your consent to Ninestar Image Tech Limited doing business as G&G, so that we may send you promotional emails. You may contact us to withdraw your consent or view our Privacy Policy at any time.
Accept Refuse and leave